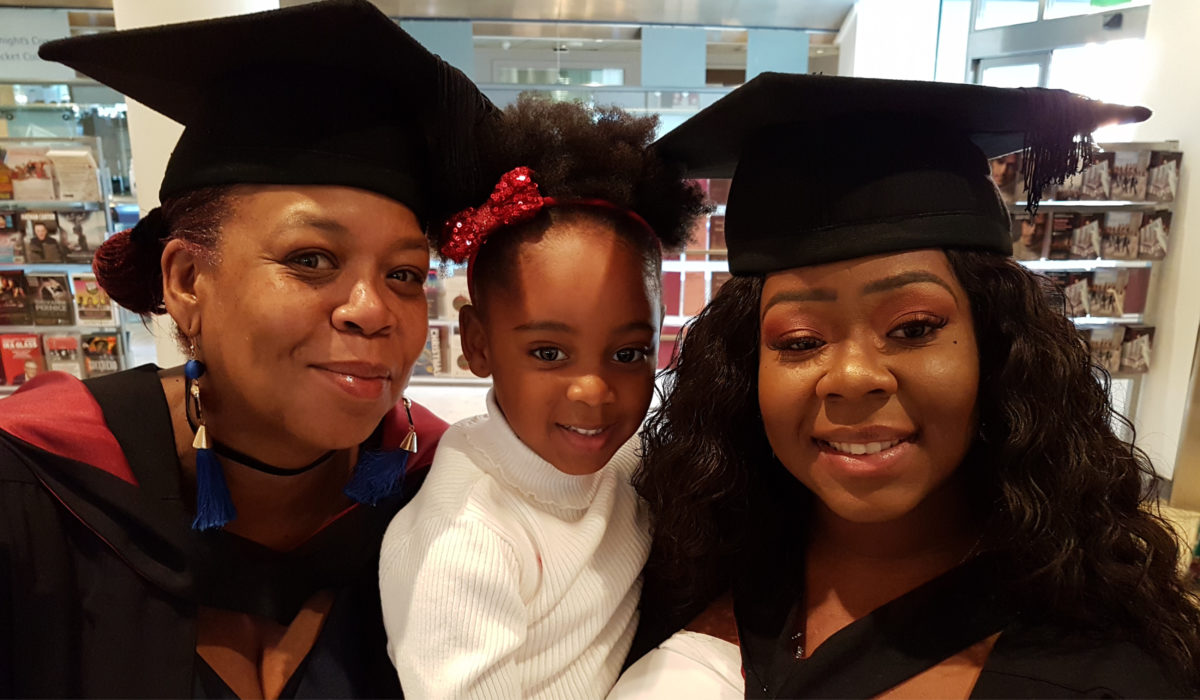 Double delight as Mum and daughter both receive honours at Graduation.

Graduation day was extra special for UCEN Manchester alumni Kimoni Bell and her mum Paula Smith who both received their honours on the same day in October 2019.

The beaming pair, who studied with higher education provider UCEN Manchester, donned cap and gown for the prestigious ceremony at the Bridgewater Hall, in Manchester City Centre.

And not only did Kimoni collect her own qualification on the day but she also attended her mother’s ceremony in an official capacity, as a co-optee member of the UCEN Manchester board.

Kimoni (25), from Stretford, said: “I’m bursting with pride. I’ll actually be on stage as part of the academic graduation party when my mum collects her foundation degree during the morning ceremony, which is fantastic.

“I know I’ll be overwhelmed when it’s my turn to collect my degree in the afternoon. All the hard work will have been worth it.”

Mum-of-seven and grandmother of eight Paula (49) said: “I’m really looking forward to it although I’m nervous as well. I’m so happy that I made it to this day – graduating with my daughter is just amazing.”

Kimoni learned about UCEN Manchester’s wide range of courses while she was on maternity leave with her daughter Princess-Amour Kyezu, who is now four, and studied a Business and Management Foundation Degree, which is validated by Manchester Metropolitan University.

Kimoni, who works as a Graduate Advisor for Greater Manchester Higher, said: “I’ve had so many opportunities at UCEN Manchester, such as being Student Governor for two years and now a co-optee board member. With smaller class sizes and more individualised learning, I’ve been able to reach my full potential.”

Paula, who left school with no qualifications and became a teaching assistant at a local primary school, was inspired to join UCEN Manchester when she was a guest at a graduation ceremony in the Bridgewater Hall.

She said: “My message to anyone thinking about heading back to education is don’t let your fears hold you back, burst through them. Believe in yourself and know that you can do this!”