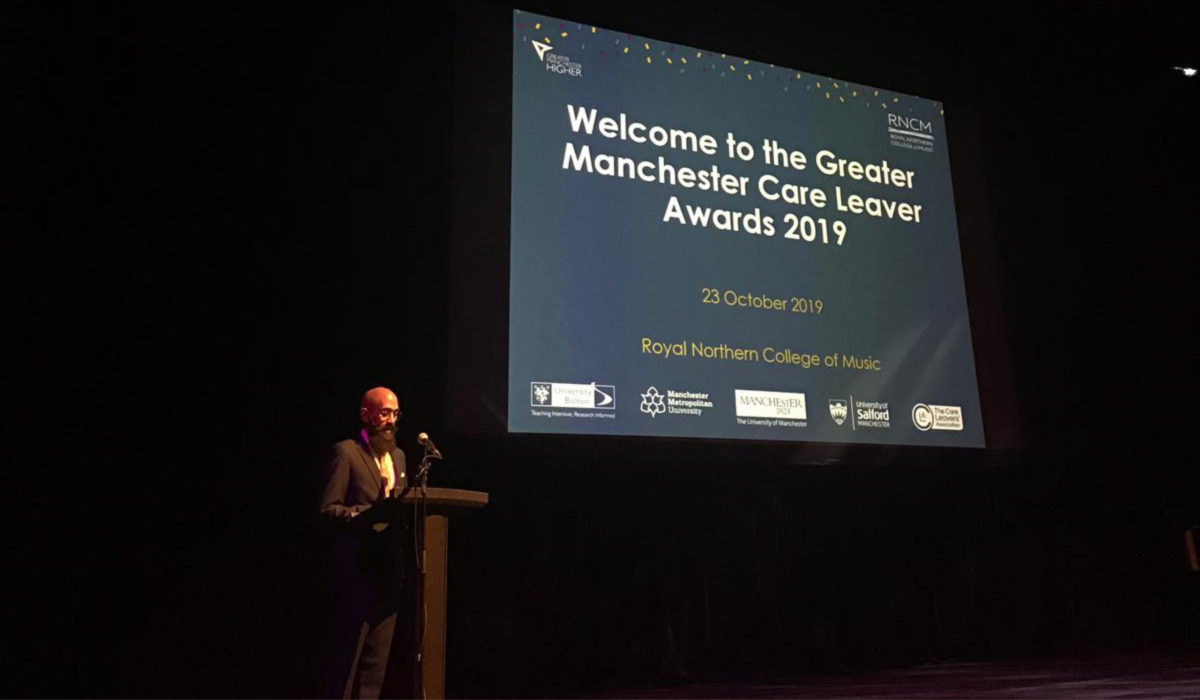 The event was a celebration of the amazing achievements of local young people from across Greater Manchester.

Keynote speaker Saeed Atcha opened the evening sharing his own experience and motivational words: “every one of you is destined for excellence”. Saeed, from Bolton, became the youngest recipient of an MBE in Her Majesty the Queen’s 2019 New Year’s Honours List for services to young people and the community in Greater Manchester.

We were also lucky enough to witness poems, written and delivered, by care-experienced ambassadors from the Greater Manchester Youth Network (GMYN) project, and a rap written and performed by a member of Gorse Hill Creative Studios. These were truly inspirational moments, and it was an honour that these young people shared their personal stories through the spoken word.

A final-year University of Manchester student, who is care-experienced, was nominated for an award by her local authority. She attended the ceremony and said: “it was such a lovely evening, it was so nice to see so many people that have experienced struggles being recognised and it felt good knowing they felt encouraged and so positive! I also met with someone from the Virtual head team that I hadn’t seen since I was 16 and it was so lovely! The speech by Saeed Atcha who was a care leaver and has an MBE was very inspiring.”

The number of nominations, and audience size was the biggest yet, with 325 nominations received.

Sam Kalubowila, the Head of Greater Manchester Higher, who compered the event said: “This event is one of the highlights of my calendar – it’s wonderful to see all the GM Universities and Local Authorities working together to celebrate the success of care-experienced young people from across our region.

“It’s an incredible privilege to present the awards – sending a massive thank you to those who nominated young people, as well as huge congratulations to each individual who was nominated for an award – it was inspiring to hear of their achievements. Finally – a thanks to all those involved in organising the event, who worked really hard to bring it all together. I’m already looking forward to next year.”

Well done and congratulations to all the worthy nominees and winners.